Buddhism: Who were Buddha and Amida Buddha? 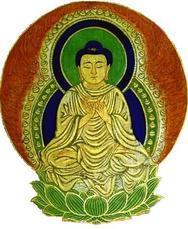 Amida Buddha is the embodiment of enlightenment, compassion and wisdom. Amida Buddha can be considered as symbolizing both the historical Shakyamuni Buddha as well as the Dharma itself.

Amida Buddhas 48 Vows are condensed into the 18th Vow, the Primal Vow that states, If I were to become a Buddha, and people, hearing my Name, have faith and joy and recite it for even ten times, but were not born into my Pureland, may I not gain enlightenment.

Dharmakara Bodhisattva established and fulfilled the special Vow to save all sentient beings and become Amida Buddha. While the other Buddhas help people who accumulate meritorious deeds, practice meditative activities, and perfect wisdom, Amida Buddha saves the being of blind foolishness and karmic evil through form (Primal Vow) and Name (Nembutsu). That is the person who realizes himself as being truly human (ignorant and evil) and becomes his foolish self attains Buddhahood by virtue of Amida Buddha.

The 48 vows are detailed within The Sutra on the Buddha of Infinite Life, Part 1

The Shakya clansmen dwelt along the Rohini River which flows among the southern foothills of the Himalayas. Their king, Shuddhodana Gautama, established his capital at Kapilavastu and there had a great castle built and ruled wisely, winning the acclaim of his people.

The Queen's name was Maya. She was the daughter of the King's uncle who was also the king of a neighboring district of the same Shakya clan. For twenty years they had no children. But one night Queen Maya had a strange dream, in which she saw a white elephant entering into her womb through the right side of her chest, and she became pregnant. The King and the people looked forward with anticipation to to the birth of a royal child. According to their custom the Queen returned to her parents' home for the birth, and on her way, in the beautiful spring sunshine, she took a rest in the Lumbini Garden.

All about her were Ashoka blossoms. In delight she reached her right arm out to pluck a branch and as she did so a prince was born. All expressed their heart-felt delight with the glory of the Queen and her princely child; Heaven and Earth rejoiced. This memorable day was the eighth day of April.

The joy of the King was extreme and he named the child, Siddhartha, which means Every wish fulfilled.

In the palace of the King, however, delight was followed quickly by sorrow, for after several days the lovely Queen Maya suddenly died. Her younger sister, Mahaprajapati, became the child's foster mother and brought him up with loving care.

A hermit, called Asita, who lived in the mountains not far away, noticed a radiance about the castle. Interpreting it as a good omen he came down to the palace and was shown the child. He predicted: This Prince, if he remains in the palace, when grown up will become a great king and subjugate the whole world. But if he forsakes the court life to embrace a religious life, he will become a Buddha, the Savior of the world.

At first the King was pleased to hear this prophecy, but later he started to worry about the possibility of his only son leaving the palace to become a homeless recluse.

At the age of seven the Prince began his lessons in the civil and military arts, but his thoughts more naturally tended to other things. One spring day he went out of the castle with his father. Together they were watching a farmer at his plowing when he noticed a bird descended to the ground and carried off a small worm which had been turned up by the farmer's plough. He sat down in the shade of a tree and thought about it, whispering to himself: Alas! Do all living creatures kill each other?

The Prince, who had lost his mother so soon after his birth, was deeply affected by the tragedy of these little creatures.

The spiritual wound deepened day by day as he grew up; like a little scar on a young tree, the suffering of human life became more and more deeply engrained in his mind.

The King was increasingly worried as he recalled the hermit's prophecy and tried in every possible way to cheer the Prince and to turn his thoughts in other directions. The King arranged the marriage of the Prince at the age of nineteen to the Princess Yashodhara. She was the daughter of Suprahuddha, the Lord of Devadaha Castle and a brother of the late Queen Maya.

For ten years, in the different Pavilions of Spring, Autumn and the Rainy Season, the Prince was immersed in rounds of music, dancing and pleasure, but always his thoughts returned to the problem of suffering as he pensively tried to understand the true meaning of human life.

The luxuries of the palace, this healthy body, this rejoicing youth! What do they mean to me? he thought. Some day we may be sick, we shall become aged; from death there is no escape. Pride of youth, pride of health, pride of existence -- all thoughtful people should cast them aside.

A man struggling for existence will naturally look for something of value. There are two ways of looking -- a right way and a wrong way. If he looks in the wrong way he recognizes that sickness, old age and death are unavoidable, but he seeks the opposite.

If he looks in the right way he recognizes the true nature of sickness, old age and death, and he searches for meaning in that which transcends all human sufferings. In my life of pleasures I seem to be looking in the wrong way.

Thus the spiritual struggle went on in the mind of the Prince until his only child, Rahula, was born when he was 29. This seemed to bring things to a climax, for he then decided to leave the palace and look for the solution of his spiritual unrest in the homeless life of a mendicant. He left the castle one night with only his charioteer, Chandaka, and his favorite horse, the snow-white Kanthaka.

His anguish did not end and many devils tempted him saying: You would do better to return to the castle for the whole world would soon be yours. But he told the devil that he did not want the whole world. So he shaved his head and turned his steps toward the south, carrying a begging bowl in his hand.

The Prince first visited the hermit Bhagava and watched his ascetic practices. He then went to Arada Kalama and Udraka Ramaputra to learn their methods of attaining Enlightenment through meditation; but after practicing them for a time he became convinced that they would not lead him to Enlightenment. Finally he went to the land of Magadha and practiced asceticism in the forest of Uruvilva on the banks of the Nairanjana River, which flows by the Gaya Village.

The methods of his practice were unbelievably rigorous. He spurred himself on with the thought that no ascetic in the past, none in the present, and none in the future, ever has practiced or ever will practice more earnestly than I do.

Still the Prince could not realize his goal. After six years in the forest he gave up the practice of asceticism. He went bathing in the river and accepted a bowl of milk from the hand of Sujata, a maiden, who lived in the neighboring village. The five companions who had lived with the Prince during the six years of his ascetic practice were shocked that he should receive milk from the hand of a maiden; they thought him degraded and left him.

Thus the Prince was left alone. He was still weak, but at the risk of losing his life he attempted yet another period of meditation, saying to himself, Blood may become exhausted, flesh may decay, bones may fall apart, but I will never leave this place until I find the way to Enlightenment.

It was an intense and incomparable struggle for him. He was desperate and filled with confusing thoughts, dark shadows overhung his spirit, and he was beleaguered by all the lures of the devils. Carefully and patiently he examined them one by one and rejected them all. It was a hard struggle indeed, making his blood run thin, his flesh fall away, and his bones crack.

But when the morning star appeared in the eastern sky, the struggle was over and the Prince's mind was as clear and bright as the breaking day. He had, at last, found the path to Enlightenment. It was December eighth, when the Prince became a Buddha at thirty-five years of age.

He went first to Mrigadava in Varanasi where the five mendicants who had lived with him during the six years of his ascetic life were staying. At first they shunned him, but after they had talked with him, they believed in him and became his first followers. He then went to the Rajagriha Castle and won over King Bimbisara who had always been his friend. From there he went about the country living on alms and teaching men to accept his way of life.

Men responded to him as the thirsty seek water and the hungry food. Two great disciples, Sariputra and Maudgalyayana, and their two thousand followers, came to him.

At first the Buddha's father, King Shuddhodana, still inwardly suffering because of his son's decision to leave the palace, remained aloof, but then became his faithful disciple. Mahaprajapati, the Buddha's stepmother, and Princess Yashodhara, his wife, and all the members of the Shakya clan began to follow him. Multitudes of others also became his devoted and faithful followers.

For forty-five years the Buddha went about the country preaching and persuading men to follow his way of life. But when he was eighty, at Vaisali and on his way from Rajagriha to Shravasti, he became ill and predicted that after three months he would enter Nirvana. Still he journeyed on until he reached Pava where he fell seriously ill from some food offered by Chunda, a blacksmith. Eventually, in spite of great pain and weakness, he reached the forest that bordered Kusinagara.

Lying between two large sala trees, he continued teaching his disciples until his last moment. Thus he entered into perfect tranquility after he had completed his work as the world's greatest teacher.

Under the guidance of Ananda, the Buddha's favorite disciple, the body was cremated by his friends in Kusinagara.

Seven neighboring rulers as well as King Ajatasutru demanded that the relics be divided among them. The People of Kusinagara at first refused and the dispute even threatened to end in war; but under the advice of a wise man named Drona, the crisis passed and the relics were divided among the eight great countries. The ashes of the funeral pyre and the earthen jar that contained the relics were also given to two other rulers to be likewise honored. Thus ten great towers commemorating the Buddha were built to enshrine his relics and ashes.

The Last Teaching of the Buddha